With the success of development programs AVALANCHE RUSH bringing in massive growth to the lands of AVAX, the people of AVAX found themselves with the issue of getting enough resources to fuel and power the rapid development. With the mainland region fully developed and the high cost of ETH gas fees making it hard to import resources, the administration of His Royal majesty Emin Gün Sirer has decided to turn their focus to developing the island archipelago region of AVAX.

Codenamed Island Rush, the program is aimed at developing the undeveloped and resource rich island archipelago region which is in dire need of development and bridging. Plans for new cities have been drawn up and industrialist/builders from all around the world are invited to partake in the great development project. Many have answered the call of His Royal Majesty Emin Gün Sirer from industrialists looking bid on islands to start new ventures all the way to working families eager to relocate to new cities and work the resource rich islands. Large multinational conglomerates such as the GB Group and Ape Inc. are making plans to become dominant players in the region. Whether you are building bridges to toll, developing industries on the islands, managing needs at population centers or running for governor, there are many opportunities for anyone to establish themselves at the Islands of AVAX.

Unlike other NFT projects, the Islands of AVAX NFT collection seeks to generate a comprehensive economic simulation for the island NFTs where island holders receive monthly airdrop of in game tokens and NFTs.

50% of island presale proceeds is allocated to a transparent global DAO fund with a goal of creating a perpetual fund. The DAO fund is invested into blue chip DeFi project such as AAVE and Curve. A portion of funds (from mountain islands) will be allocated to setting up mining rigs. Monthly reporting of DAO fund will be posted on website and discord for transparency.

Yields from the perpetual fund are used to purchase in game token from Trader Joes and distributed to qualifying players based on player economic output (See section on Island Economic Unit).

In the later stages of the game, players may participate in the community governance to discuss and advise the custodial team how the DAO fund can be utilized.

The Island Economic Unit (IEU) is the base measurement of economic output for each player with one IEU credited to the play for each completed set of 3 NFts consisting of:

Players can have multiple IEUs for each month by holding multiple completed sets in their wallet. Player IEU may be augmented by any district boosters built by the district governor. (Eg. +20% boost from Rail Network infrastructure). IEU count for each player is rounded down to the nearest whole number to calculate total play IEU. Wallet snapshot is taken on the last day of each month for IEU calculation of the month.

Payouts are made around the first week of each month based on the snapshot taken on the last day of the preceeding month. Player payouts is based on the IEU produced for the month relative to all IEU produced by all players in the game. The more IEU you have for the month, the bigger your allocation. District Governors (DG) receive up to 10% of all deposits within their districts in the form of a district tax. DGs can adjust tax rate to encourage investment as well as construct district power ups to increase IEU output of all players within his/her district (Increasing maximum potential tax revenue).

Example: For the month of May, you have a total of 3 IEU. There is a total of 100 IEU from all qualifying players this month. You receive 2.7% of the monthly airdrop during the first week of June (3% of 100 IEU in play —10% District Tax).

Future Feature: Depending on the export partner of the month, payouts may vary (eg. If the Island archipelago region has a trade deal with the Republic of Good Bridging, $GB will be dropped that month)

Rich with resources, resource islands are ripe for development and bridging. Resource types include Food, Metals, Lumber and Oil; each relating to a different type of activity. 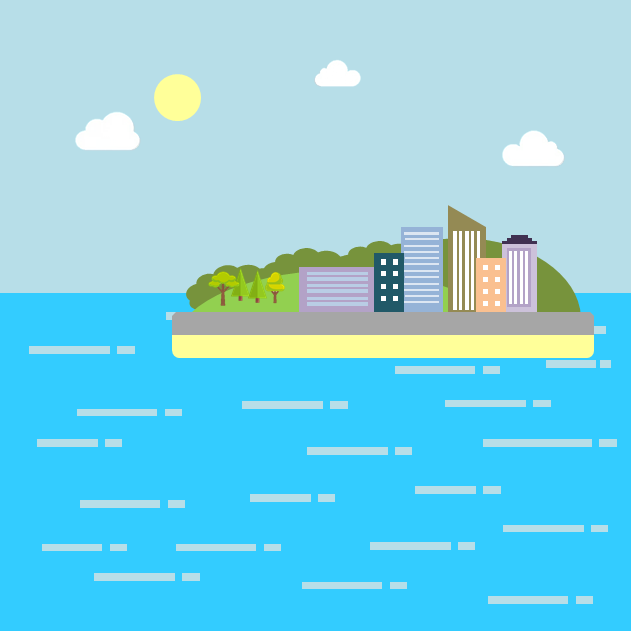 Urban Islands are the population centers where you can get workers. Owners of newly urban centers receive airdrops of land plots based on their urban island size. Workers can work in urban centers to generate economic activity.

Land plots are used to build structures within urban centers from residences (housing workers to work resource islands) to manufacturing plants (to make more NFTs for sale). Land plots can be sold to other players for development.

Buildings enable simluation of the economic activity (Eg. Token Airdrops & other NFT airdrops). At the later stages of the game, building can only be minted by players with manufacturing plants.

How they interact with each other

In order to qualify for monthly airdrops, you need to be holding 1 Urban building, 1 resident building and 1 resource/urban island at the time of snapshot calculation. Each set of 3 you hold grants you one Island Economic Unit.

The Islands of AVAX economy is massive with many moving parts. There are many ways to participate and earn in game tokens each with different levels of involvement and time spent. Here are some common gameplay styles players will be taking on:

It’s time to make it big in the island archipelago region! Island owners and contribute to the economic simulation by acquiring resource islands and ensuring they have workers working on them. Ensure workers have accommodations by building residences on urban islands. Focus and specialise on one resource to be a major player or diversify across different resource to hedge market risks. Primary resources range from food, lumber, metal and oil. Island owners can also acquire urban islands and resell building plots to other island owners looking to house their population or keep them to house their own personal workforce. 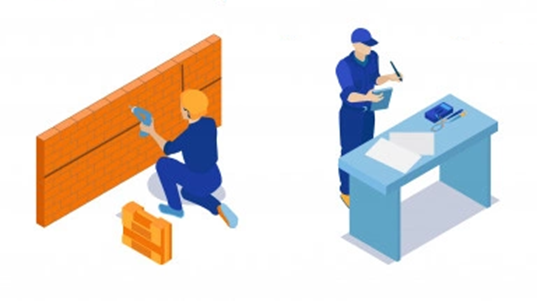 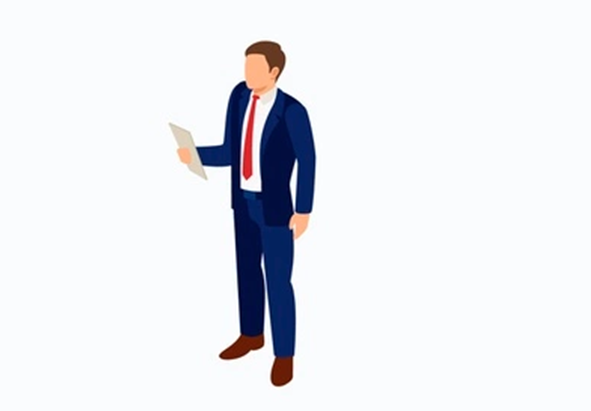 As with the saying, with every gold rush, the biggest winners are the ones who sold the shovels. As industrialists, you focus on meeting the ever growing needs of island operators by providing them with building NFTs and infrastructures. You own factories and manufacturing plants on urban plots churning out much needed NFTs, your bridges are generating you toll revenue from the busiest islands and you are already planning ahead in preparation for upcoming new district openings to get the best urban lands for your next ventures.

Without order, chaos reigns. Your role is important in the region as you guide industrialists and settlement operators the support needed to thrive. Working out of your governor island with 16 development land plots, you play a huge role in determining the development level of your region. As governor, you are entitled to 5% (can be set to 10% max) of all player economic activity in your district. Don’t just pocket the tax dollars right away as you will need to put that tax dollar into district infrastructures to increase the overall district economic output (eg. Rail Network +20% of all player economic output). Industrialists are quick to jump ship and develop elsewhere if a rival district offers better tax incentives and district perks. You must keep yourself ahead of the pack to become the most desirable district for development. 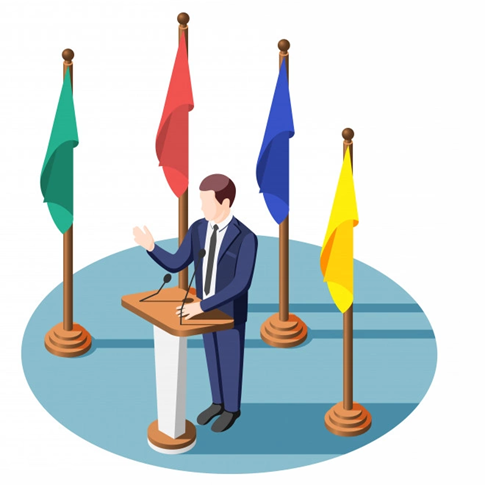 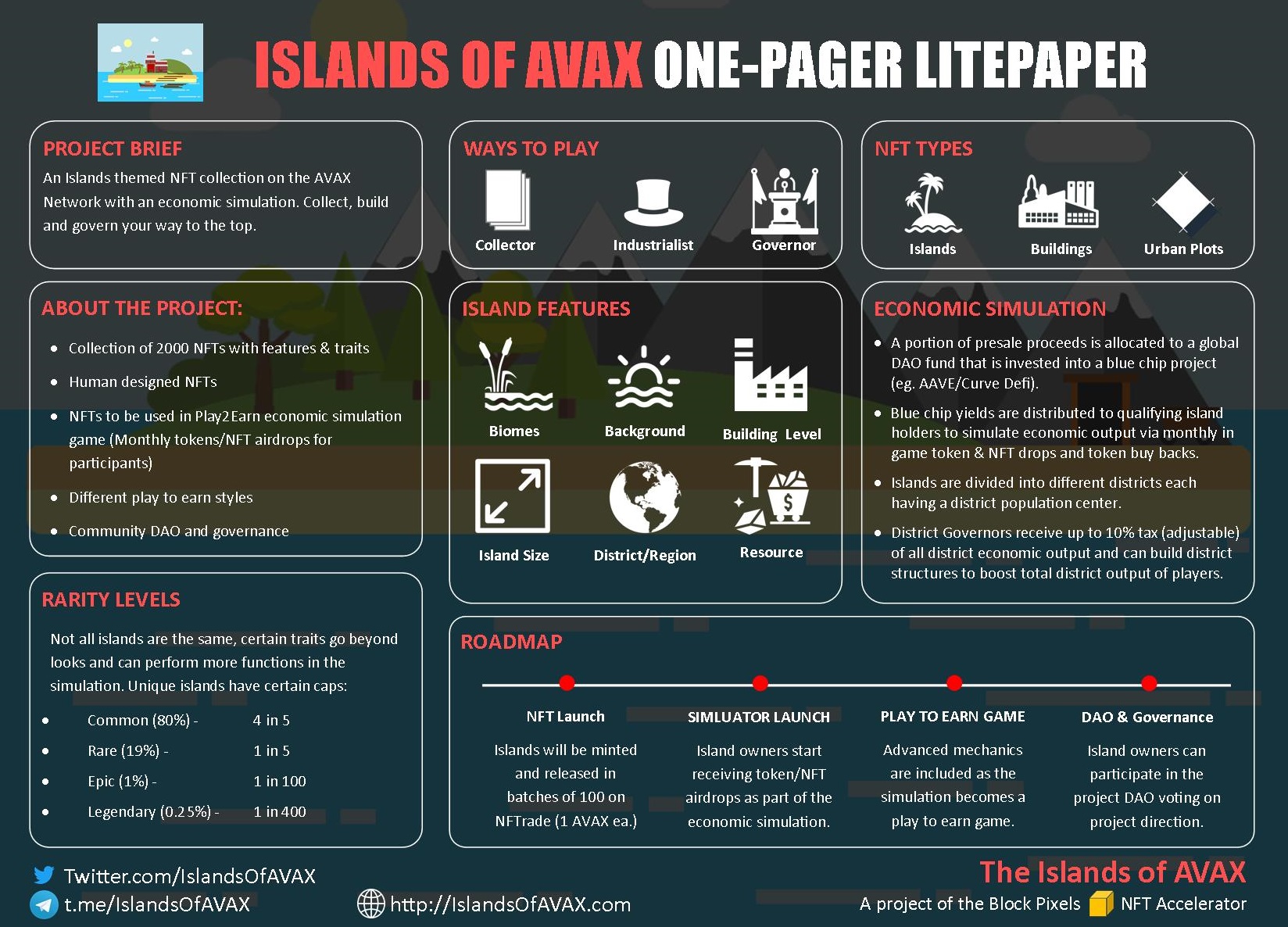 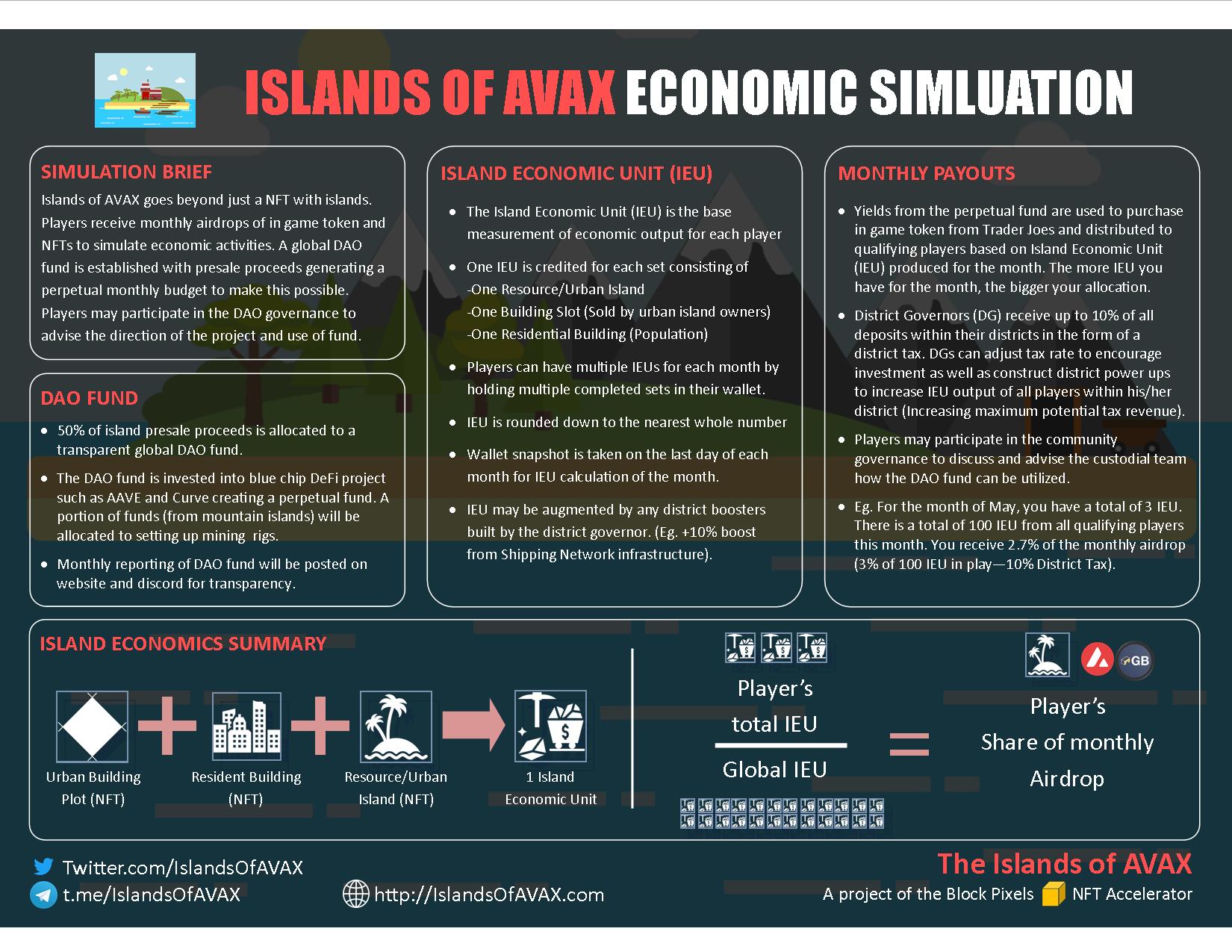 Islands of AVAX will be launching with a number of prize giveaways on social media. Be sure to follow us on Twitter and Telegram to not miss out.

Islands will be pre-minted and released to the public in batches of 100 on NFTrade (Lands Rush Events). Prices starting at 1 AVAX each and are claimed on a first come first serve basis. All islands are listed under specific district and regions, 5% of island sales proceeds will go to the District Governors as district tax. A portion of the presale proceeds will be put into an interest yielding platform (eg. AAVE/CRV etc...) to generate monthly allowance to pay out in game rewards (directed by the DAO).

Urban land plot NFTs are airdropped to urban island owners (4-8 plots per urban island or 16 per district governor) & buildings options are available to players. Monthly proceeds from the project gaming fund will be distributed to island holders to simulate economic activity. (Token dropped to be determined by players via governor voting system) Island owners start receiving token/NFT airdrops as part of the economic simulation (See gameplay secton on how in game payout is calculated).

Expansion to other chains to allow chain vs chain gameplay. Each chain/network represents a nation filled with thousands of players on each side. Imagine leading the AVAX island region and fighting off invaders from a war mongering ETH chain nation while building up an alliance with the BSC chain nation to retailate via a trade embargo.